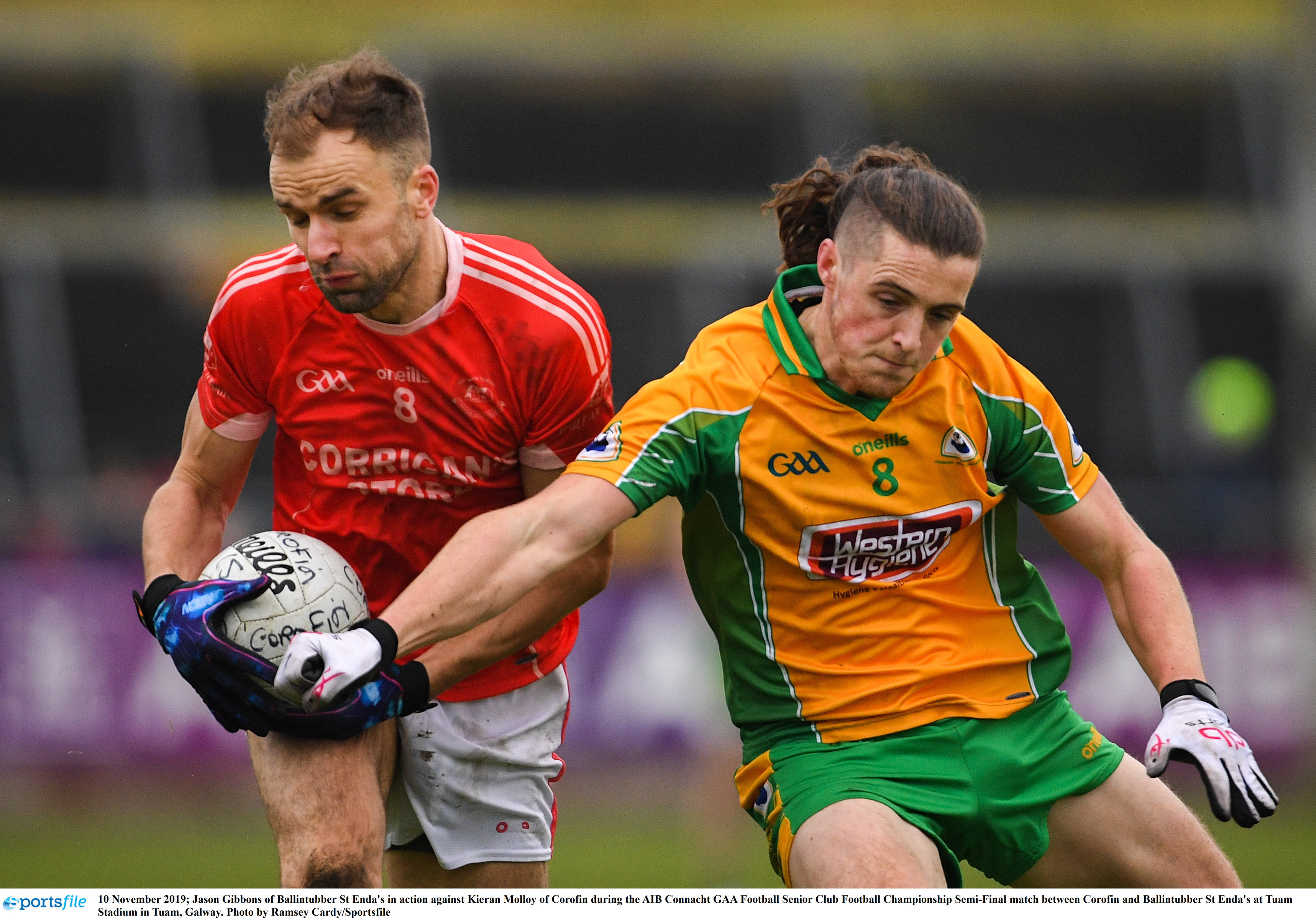 All Ireland Champions Corofin are on course for their fourth Connacht Senior Football Championship in a row after holding off a late rally from Mayo Champions Ballintubber in an enthralling encounter in Tuam Stadium today. Man of the match Liam Silkes early second half goal was the decisive moment of a gripping contest in front of a bumper crowd in perfect November conditions.

Corofin started faster and soon settled into their familiar rhythm, using the boot whenever possible and being more than content to play sideways and backwards when faced with a packed defence. Their goalkeeper Bernard Power set up much of their play, his kickouts both long and short perfect throughout. They led two nil after 10 minutes following good points from Michael Farragher and Kieran Molloy after slick moves. Diarmuid O’Connor got Ballintubber off the mark in the eleventh minute, before an inch perfect pass from Mícheál Lundy gave Martin Farragher the space to point, when perhaps the option of a goal was on. An equally brilliant kick pass from Jason Gibbons allowed Stephen O’Malley to point a minute later, followed closely by a huge Michael Plunkett score from way out to equalise the teams three each. There was a proper championship intensity to this game as you would expect from the first throw in with hard tackling a given as possession was fiercely contested around the middle third. Liam Silke popped up for his customary point in the 18th minute before Cillian O’Connor, who was shadowed everywhere by Kieran Fitzgerald over the hour, got his first score with a long range free. Ian Burke and Gary Sice were working hard to create space in the forwards for Corofin, and they combined to work the opportunity for the free in on the stroke of half time that Jason Leonard converted to give the Galway Champions a one point 0-5 0-4 lead at the break, after an absorbing high quality half of football.

The crucial score of the game came in the 3rd minute of the second half, Liam Silke somehow ghosting into a position all on his own in front of the goals and receiving a clever pass from Michael Farragher before sliding coolly into Brendan Walsh’s net. Jason Leonard then exchanged frees with Cillian O’Connor and Ciaran Gavin, Leonard landing three sweet strikes from outside the 45 metre line in this period. Martin Farragher added his second point midway through the half to give the Galway champions a commanding 6 point lead, a position it looked like they would win comfortably from. However Ballintubber showed fantastic resilience to take over the final quarter and kick the next 5 points in a row, their revival sparked by fullback Brian Murphy’s fine point and sustained by the unerring boot of Cillian, who kept his nerve with some pressure kicks in the closing stages to really rattle Corofin and set up the grand stand finish. The Mayo champs were coming in waves in the closing stages and throwing everything at Corofin in pursuit of the equaliser that would have forced extra time. However Corofin aren’t All Ireland Champions for nothing and when they forced a turnover deep in their own defence in injury time, Power showed the presence of mind to launch a long kick into the Ballintubber half where they were light on numbers having committed so many bodies to attack. Ian Burke subsequently won posession and cleverly won the crucial free converted by Darragh Silke to give them the two point lead they held to the end. Corofin now march on to the Connacht Final against Roscommon Champions Padraig Pearses, who they will meet in Tuam on 24th November.