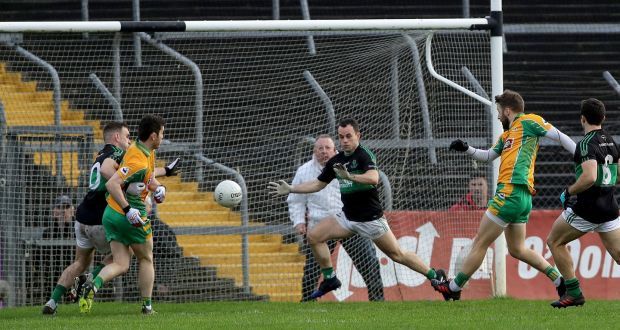 Corofin remain on course to become the first side to win the All-Ireland club football title for the third consecutive year after leading from start to finish against Nemo Rangers at Cusack Park in Ennis.

The margin might have been less than the 15-point drubbing they dished out to Nemo Rangers in the All-Ireland final almost two years ago but the Galway champions were on top throughout and the result was never in doubt in front of a crowd of 4,150.

It took Nemo Rangers almost 24 minutes to get their opening score and by then a rampant Corofin side had 1-4 on the board with some superb flowing football.

Nemo Rangers had not conceded a goal in their last six matches but Micheál Martin was picking the ball out of his net after just 33 seconds after Michael Lundy rounded him to score after a pass from Martin Farragher.

Jason Leonard and Ronan Steede added points and Farragher made it 1-3 to 0-0 after 12 minutes after being set up by Gary Sice.

Nemo struggled to get a foothold in the game and after a free from Farragher extended the Galway champions’ lead, their goalkeeper Bernard Power produced a stunning save to deny Barry O’Driscoll.

Alan O’Donovan finally got the Cork side off the mark and Conor Horgan added another but Corofin had the final say of the half when Kieran Molloy opted to fist a point from a goal chance to take a six points lead into the break on a day when there was just a slight crosswind.

The sides twice exchanged points in the opening 10 minutes of the second-half with Lundy and Martin Farragher hitting the target for Corofin and Luke Connolly responding with a brace for Nemo.

Kevin O’Donovan landed another effort for Nemo to leave them trailing by doubles, 1-7 to 0-5, after 41 minutes of the contest.

Mike Farragher restored Corofin’s six points advantage with 12 minutes remaining after being set up by his brother Martin and then Ian Burke pushed the lead out further a fine point from the left.

Barry O’Donovan pulled back a point for Nemo but this was cancelled at the other end by Ian Burke as the Galway champions of the past seven years eased their way into their fifth All-Ireland club final, having won all four previous deciders.

It will take a special effort to stop them making that five in a couple of weeks.

Article courtesy of the Irish Times

GAMES: We defeated Salthill-Knocknacarra in the county ...

The county quarter final game between Corofin and Salth...

The county quarter final game between Corofin and Salthil...

CHAMPIONSHIP: It was a very successful weekend for our th...

Corofin V An Cheathrú Rua will be live streamed on Friday...